Saltfish is a staple of the Caribbean and Latino diet. Saltfish originated in Newfoundland some 500+ years ago. Salting and air drying fish and other meats was a way of life for people around the world then. 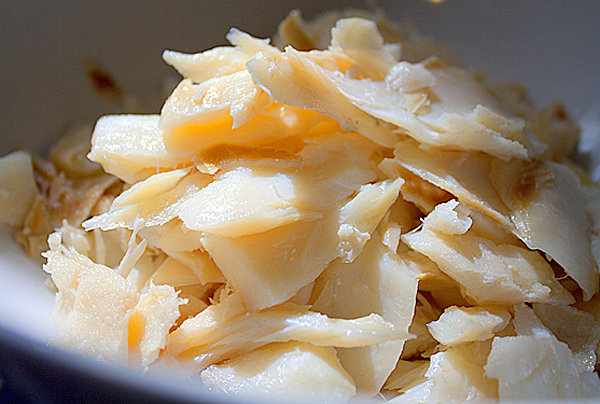 Saltfish found its way to the Caribbean during the Triangular Trade at the dawn of the 18th Century.  Today you will find countless saltfish recipes throughout the Spanish and English speaking Caribbean. Popular Caribbean saltfish dishes include Saltfish Buljol from Trinidad, Cook-up Saltfish from Jamaica and the ever popular Fritters.

Though cod fish is most often used to make saltfish any meaty white fish (pollock, snapper and shark, etc.) can be salt cured and dried to make saltfish. Saltfish can be found in most large grocery store and almost anywhere that Caribbean and Hispanic foods are sold.

Saltfish is the main ingredient in a number of Caribbean dishes across various cultures. It can be used to make fritters or cooked with beans  or vegetables to make an entree. Saltfish makes up one half of the Jamaican national dish, Ackee & Saltfish.